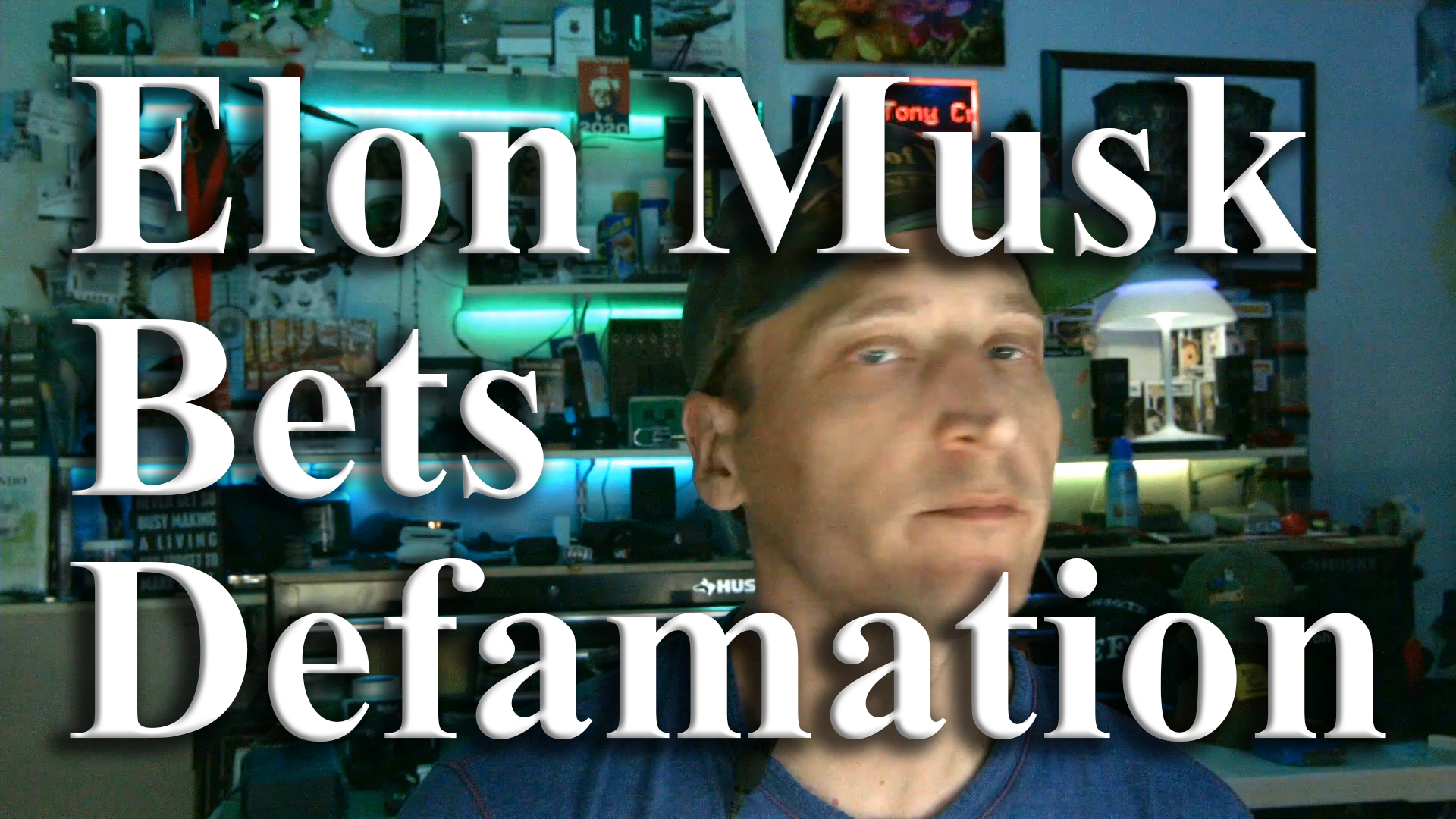 Over the weekend, Elon Musk traded barbs with Vernon Unsworth, one of the people who assisted in the operation that rescued the 12 Thai boys and their soccer coach from a flooded cave.

Normally, billionaire CEOs are careful about what they say. Their actions can have lasting consequences on their business. After all, the CEO is the public face of the business and the position is often held so long as the officer is effective and behaving themselves.

Enter Elon Musk, a “self-made” billionaire who made his initial fortune when he sold his web software company to Compaq for $340 million during the dot-com bubble. He then founded X.com, an online payment company that went on to become PayPal.

Mr. Musk’s current digs have him creating electric cars, lithium-ion batteries, and rocketships, as the CEO of Tesla Motors and SpaceX.

So when the Thailand cave flooded and the boys and their coach were discovered trapped but alive, Elon was in a position to offer engineering support to the rescue effort. Musk and his team appear to have rapidly-prototyped a boy-sized submersible for use in a potential cave rescue operation.

Well, long story short, the Thailand soccer team was rescued starting around July 7th or 8th, 2018, and Elon’s submersible arrived near the end of the rescue. The boys were successfully rescued – without the sub. Still, the technology and the efforts could prove very practical for future rescue operations and absolutely no one was sure that the final rescue would go as smooth as it did. The sub had and still has the potential to help in a rescue.

Shortly after the soccer team was safe, it was reported that one of the people involved in the larger rescue effort, Vernon Unsworth, claimed that the submersible would not have worked and “was not practical” for the cave mission. Mr. Unsworth might know – he was allegedly involved in mapping the cave system for the rescue efforts.

I’m not exactly sure why Mr. Unsworth felt this was a productive thing to say. Even if it’s true that the submersible wouldn’t have worked for this particular cave rescue, is anyone really being helped by calling out other rescue efforts? Perhaps that’s all he was doing and his report got blown out of proportion.

Except Mr. Unsworth did follow his statement up by saying that Mr. Musk can stick his submersible where it hurts.

Now I’m not sure which statement caused Elon’s reaction more: the questioning of his engineering or the petty ad hominem insult.

But the CEO of everyone’s favorite electric car company and sender of many rocket ships then tweeted that he would make a video of the submersible navigating the caves to prove that the engineering was sound.

He finished the tweet with “Sorry pedo guy, you really did ask for it.” followed by another tweet “Bet ya a signed dollar it’s true.”

The Internet blew up at the apparent uncouthness of this exchange. Tesla stock dropped by about 3% Monday. u/MakerMuperMaster compiled list of images of Elon “Musk being an utter asshole”. And Mr. Unsworth pledged that he would pursue legal action upon returning home.

I thought we could take this opportunity to discuss the law of defamation and whether the exchange we just witnessed reached some level of legal action.

Defamation, (also known as “calumny”, “vilification”, or “traducement” according to wikipedia), is the communication of a false statement that harms a potential Plaintiff. Libel and Slander are both kinds of Defamation. Libel is written and Slander is spoken.

If you’re interested in more details on how defamation works around the world, I recommend you start with the highly-cited article on Wikipedia, follow links to the sources you’re interested in, and do Google Scholar searches for further details on specific topics. There’s a lot. Our links are in the description.

[wikipedia] Under U.S. law, many states recognize that some categories of statements are considered to be defamatory per se, such that people making a defamation claim for these statements do not need to prove that the statement was defamatory.

In an action for defamation per se, the law recognizes that certain false statements are so damaging that they create a presumption of injury to the plaintiff’s reputation, allowing a defamation case to proceed to verdict with no actual proof of damages. Although laws vary by state, and not all states recognize defamation per se, there are four general categories of false statement that typically support a per se action:

If the plaintiff proves that such a statement was made and was false, to recover damages the plaintiff need only prove that someone had made the statement to any third party. No proof of special damages is required. However, to recover full compensation a plaintiff should be prepared to prove actual damages.

As with any defamation case, truth remains an absolute defense to defamation per se. This means that even if the statement would be considered defamatory per se if false, if the defendant establishes that it is in fact true, an action for defamation per se cannot survive.

The conception of what type of allegation may support an action for defamation per se can evolve with public policy. For example, in May 2012 an appeals court in New York, citing changes in public policy with regard to homosexuality, ruled that describing someone as gay is not defamation. [/wikipedia]

Applying this hypothetical “every state” legal framework, you can see how calling someone a pedophile could be either (1) accusing Mr. Unsworth of a crime, (3) adversely reflecting on his fitness in business or trade, especially to be around the children he’s helped rescue, or (4) accusing him of serious sexual misconduct.

On its surface, it looks like there is enough here for Mr. Unsworth to get representation and start the defamation claim process, which is something he seemed to allude to, saying “Yes, it’s not finished” when asked if he would pursue legal action.

If Mr. Unsworth won a case for a defamation claim, he’d be able to claim both direct monetary damages, such as lost wages or expenses in defending his reputation; as well as indirect or non-economic damages. The actual amounts and how they would be calculated are hard to estimate and really would require a whole other video.

Let’s suffice it to say that Elon Musk has deep pockets that paint a giant target on his back for anyone considering whether to bring their legal claim. And California does recognize claims for defamation “per se”.

One primary defense to defamation, especially in the ‘states, is the truth of the statement. If, somehow, Musk knew something about Mr. Unsworth and, somehow, he decided to publicize it in that way, and if it really were true (and provable in court), well, that would be a defense to a defamation claim.

But I’m going to assume that Elon Musk doesn’t actually know whether Unworth is such a person.

Instead, what I think Elon has done is commit the fallacy of guilt by association, also known as the “association fallacy”. Musk has seemingly claimed that, since Unsworth is a Brit Expat in Thailand, he must be there for the prostitutes, and since many prostitutes in Thailand are underage, that such a person would be in Thailand to take advantage of said… situation.

Now listen up, Musk is not wrong about the prostitution problem in Thailand. Even though prostitution is illegal in Thailand, it is still a $6.4 BILLION industry, representing over 1% of the country’s GDP.

[wikipedia] The US-based research institute “Protection Project” puts the number of children involved in prostitution living in Thailand from 12,000 into the hundreds of thousands. The government, university researchers, and NGOs estimated that there are as many as 30,000 to 40,000 prostitutes under 18 years of age, not including foreign migrants. Thailand’s Health System Research Institute estimates that children in prostitution make up 40% of prostitutes in Thailand. [/wikipedia]

But this is a country of [slow] 68 million people, beautiful mountains, oceans, history, and culture. [/slow] To assume that Mr. Unsworth is there to take advantage of underage people is untenable. While we should not deny that there is such a problem, it cannot be said that anyone who visits must have such motives.

Such unsubstantiated allegations only serve to distract from all of the hard work invested by each and every one of the people involved in the rescue. Instead a conversation is lost, the conversation about the amazing coming-together, the divers who risked their lives, the team who mapped the cave, the team that installed the pumps, everyone who supported them while we watched, nails bitten and breath held, tears wept as we helplessly hoped for the safe return of the boys and their coach.

And it distracts from the sacrifice of Saman Gunan who died saving them. His family and friends celebrate the return of the boys a bit differently, don’t you think?

And it undermines the efforts of the team of engineers and fabricators at Telsa and SpaceX whose hearts and skills came together with a real and tangible tool that really could save lives when the time comes.

[emphasis] These are the stories we need in humanity. The triumph over nature, over cowardly men, over the very improbability of our existence. YET WE ARE HERE. And to keep forgetting that, over, and over, and over, erases the collective hard work necessary to overcome. Reducing ourselves to insults simply invokes the same-old worn-out tired-feet broken-down old-school human faults that keep undoing us. [/emphasis]

I challenge you, everyone, my humble audience, me included: when you are faced with a mere disagreement – and, perhaps, even a disagreement that may not seem so mere – try to catch yourself in that reaction moment and refocus on the thing that advances your overall message or cause or truth. A disagreement is an opportunity for growth and further understanding, for the finding of common ground, and for

Oh, P.S., as a student of engineering, I find it particularly offensive that he would consider sending a dive team into the flooded caves just to prove his point. While I assume he would implement further safety precautions, a man did just die in those caves.