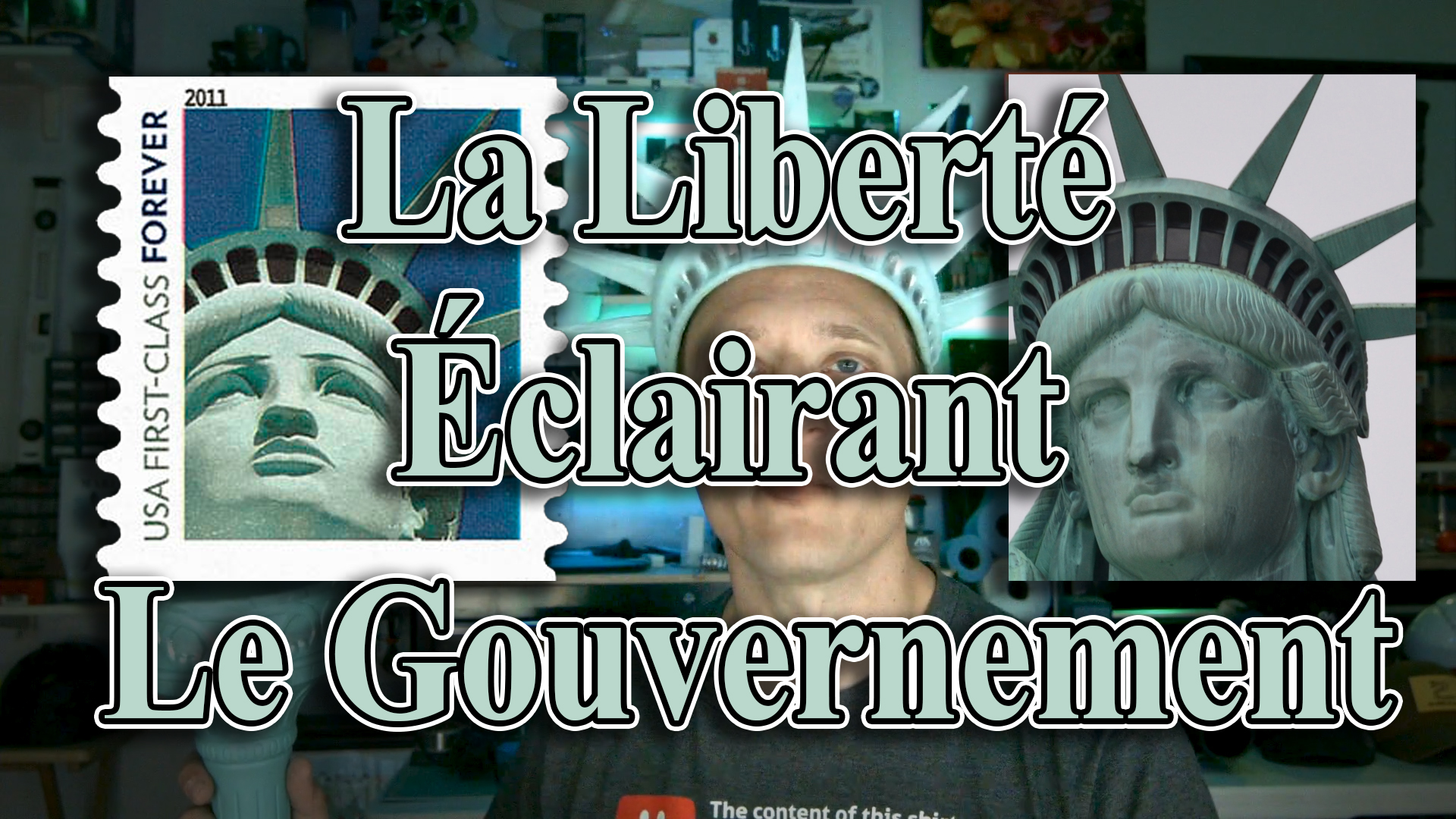 Imagine you are the “manager of stamp development” at the United States Postal Service. You are tasked with selecting the image for the next Forever stamp, a stamp that allows the sending of a first-class mailpiece domestically FOREVER, even if the price of the service increases after purchase.

Because the public was tiring of the previous Liberty Bell image, you were looking for something fresh and new, something that would be meaningful inasmuch as a stamp can be.

You want to choose a patriotic icon. You pour over dozens of patriotic scenes, ultimately selecting an image of Lady Liberty. This image seems to stand out: the perspective makes the face of “La Liberté éclairant le monde” seem more “fresh-faced,” ″sultry,” even “sexier.”

Little do you know, you have not selected an image of the Statue of Liberty but rather started an eight-year legal battle that will end with you owing millions to the bona fide author of the underlying work.

In June 2010, Mr. Terry McCaffrey selected the photograph to use as the new Forever stamp. Working with an outside contractor named PhotoAssist, he purchased a license from Getty Images on behalf of the Postal Service for a nonexclusive three-year use of the photo which authorized the Service to print over one million copies of the image. The USPS paid Getty $1,500 for the license.

No one, not McCaffery, not PhotoAssist, not even Getty, noticed that the image was not of the real Statue of Liberty.

The stamp was issued on December 1st, 2010. It wasn’t until March 18th, 2011, that the Postmaster General was notified that the image was not the real Statue of Liberty but rather the iconic replica at the New York New York Casino in Las Vegas, Nevada. By this time, 3 billion stamps had been printed.

The Postal Service’s official position was that it liked the fresh new take on Lady Liberty and would keep the photo on the Forever stamp for now. The stamp was popular and selling well, hitting 4.4 billion distributed for sale by June of 2011.

The Lady Liberty stamp was finally retired in January of 2014, after almost 12 billion were printed and 5 billion sold, grossing the Postal Service $2.1 billion in revenue. The Service regarded it as a popular stamp.

It’s a somewhat well-known fact that the Post Office doesn’t make a profit on the sending of mail. Its most profitable sales are of stamps to collectors who have no intention of redeeming them, known as “retention” or “breakage”. The USPS employs a company named Synovate to track this for them. Synovate reports approximately $75 million, representing about 5%, in unredeemed Lady Liberty Stamps.

Our Plaintiff is the sculptor of the Las Vegas Lady Liberty, Mr. Robert Davidson. He discovered the use of his statue by the Postal Service after his wife returned from a trip to a local post office. She had purchased a book of Forever Stamps and excitedly notified her husband that “our statue is on the stamp.”

He contacted several attorneys regarding copyrighting and protecting his work. Mr. Davidson’s copyright registration was eventually issued with an effective date of November 15, 2013. He immediately filed this lawsuit.

Now you can’t sue the United States successfully unless you can overcome sovereign immunity. The Federal Government is the highest power in our country, so exactly how are you going to collect your winnings if they decide not to pay?

Here, 28 U.S.C. § 1498(b) allows the government to be sued for claims of copyright infringement “for the recovery of [] reasonable and entire compensation as damages for such infringement.”

And those damages will have to be actual compensatory damages, not punitive damages or anything else, also because of the sovereignty of the federal government.

Plaintiff sought a ruling that his work was original and protected and that the government was liable for infringing his copyright; defendant, the United States, asserted the defenses of non-originality, fair use, and that plaintiff’s statue was not eligible for copyright protection because it was an architectural work for which pictorial representations are exempted from copyright protection.

Defendant conceded that the image of plaintiff’s statue was used without permission. Although the Postal Service paid for a license from Getty Images for the photograph, Getty had no rights to the underlying subject of the photograph.

The Copyright Act specifically protects “pictorial, graphic, and sculptural works.” Copyright protection in a derivative work applies “only to material contributed by the author of such work, as distinguished from the preexisting material employed in the [original] work.” “Plaintiff must show nontrivial expressive variation” between the original and the derived work and that any such differences “distinguish from the underlying work in some meaningful way.”

There is no question that plaintiff was tasked with creating a replica of the Statue of Liberty in New York Harbor, but plaintiff testified that he was given artistic license and that he both intended and achieved a more contemporary and feminine face in the end. He intended to give the face a “fresh” look, updating and making her appearance more feminine.

Defendant argues that such apparent differences are the result of camera angle, lighting, shadowing, and weathering, and should be ignored for the purposes of the originality inquiry. The Court disagreed. To the court, the differences in the faces were meaningful and not trivial. The record was full of opposite statements from the USPS: the new facial features were appealing enough to have induced Mr. McCaffrey to select the image of plaintiff’s statue and for the Postal Service to have publicly affirmed its decision to feature Mr. Davidson’s statue as a new take on a classic icon.

Nor was the USPS’s use of the image a Fair Use. The Court found that the USPS profited off of the unredeemed stamps and liked Plaintiff’s version of the Statue specifically for his “fresh” take, using the heart of his work, Liberty’s face, as the centerpiece of their workhorse Forever stamp.

Thus, the remaining question is how much was owed in damages. Plaintiff had not timely registered his work with the copyright office, meaning statutory damages, or damages set by law, were unavailable. Instead, he’s have to prove his actual damages.

Many experts testified about how the USPS typically licenses images. The USPS usually pays no more than $5,000 for a license, either through a stock photo company or by hiring their own photographers. The USPS declines to pay a running royalty.

The various experts offered various ways to calculate damages. The Court chose to construct a remedy from the perspective of a willing buyer and seller, finding that a flat rate was appropriate for the redeemed stamps and a running royalty was best for the unredeemed stamps.

The Court found a $5,000 flat rate for the redeemed stamps and a 5% running royalty on the unredeemed stamps. The Court used a $71 million figure from the Postal Service as the total expected unredeemed value from the sale of 5 billion Lady Liberty stamps. The Court added $30,000 for non-stamp products that used the image plus the $5,000 flat rate, for a total of $3,554,946.95, plus interest which is currently being calculated by the parties for the Court.

Had the Postal Service caught the mistake at the time, it likely could have licensed the image, or made one of their own, for less than $5,000.

So that’s how the United States came to owe Robert Davidson a cool three-and-a-half million for his fresh take on Lady Liberty.  Mr. Davidson had created a replica of the Statue of Liberty for the New York New York Casino, but he’d subtly altered the face. Those changes met the “minimally creative” standard for copyright protection, and it was those changes that the Postal Service wanted in a “new” and “fresh” take on the Lady Liberty stamp.

Because it was Davidson’s alterations or “transformation” of the original that was used, it was copyright infringement, but because the copyright was not timely registered, only actual damages were available to the Plaintiff. The Court found that only five grand was due for the used or redeemed stamps but that a 5% royalty was due for the collected, retained, or otherwise unredeemed stamps. The damages totalled over three and half million dollars.